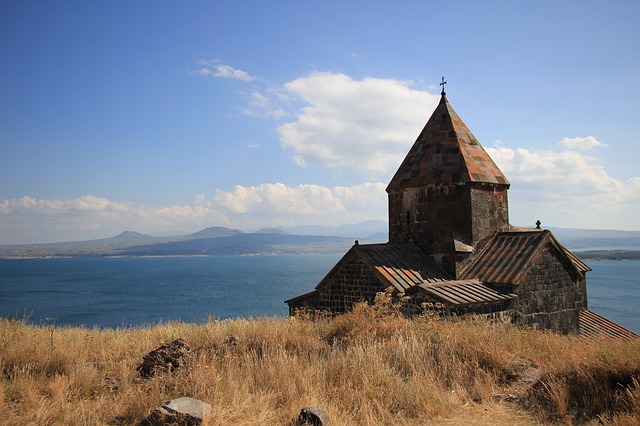 Armenia has a predominantly continental climate with cold winters and dry and hot summers. The surrounding seas, although not directly adjacent to Armenia, prevent too large temperature fluctuations. In summer it is very hot in the valleys and lowlands. Average maximum temperatures around and above 30 degrees are not uncommon from June to September. During the nights it is pleasantly cool with average lows between 13 and 18 degrees. Precipitation falls only very rarely and in small quantities. In winter the thermometer almost always sinks below freezing point at night. During the day, depending on the region, the temperatures are partly above, partly below 0 degrees. At higher altitudes there can be permafrost throughout the winter. In the north, the Caucasus prevents extreme cold spells from Siberia from spreading. At the border to Iran the climate is rather subtropical and very dry. The annual precipitation sums reach 200 to 400 mm in the valleys and low mountains and up to 800 mm on the plateaus and in the high mountains. In the winter months there is a high snow cover. However, the largest amounts of precipitation generally fall in the spring months.

For trips to Armenia we recommend the months May to October. Then it is very warm in some regions, but the weather is usually good and the days are sunny and long. In winter it is better to visit Armenia only for winter sports.