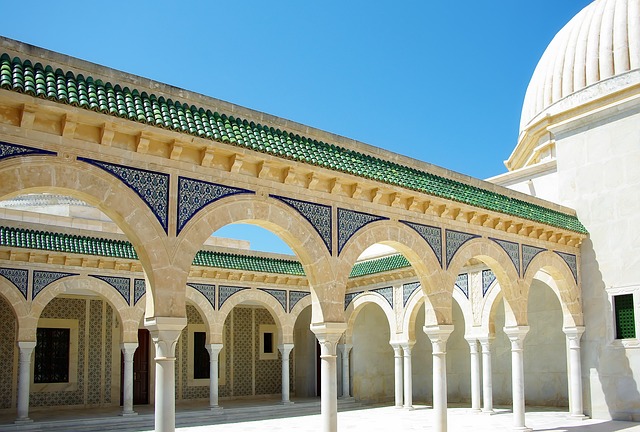 Tunisia's climate is divided into different zones. The climate becomes hotter and drier from north to south. In the north there is a Mediterranean climate with dry and warm to hot summers. Precipitation falls mainly during the winter half-year. Then the maximum values are also only between 10 and 15 degrees. In the interior of the country at the border to Algeria lies the Atlas mountains. Here prevails a continental climate with strong temperature differences in the course of the day and year. On the north side of the mountains the largest precipitation of the country falls with up to 1500 mm per square meter and year. In heights above about 800 meters it can also snow in winter. In southern and central Tunisia there is a dry desert climate with large temperature differences between day and night and between summer and winter. In the summer temperatures of up to 50 degrees are reached, in the winter the temperature rises in the day only on 10 to 15 degrees and cools at night on under 5 degrees. Sometimes light ground frost is also possible. Precipitation is very rare and occurs almost exclusively in the winter months. They are usually only between 100 and 300 mm per year.

The best time for a beach holiday on the coasts is in the summer months when there is little rainfall. The Mediterranean Sea usually provides pleasant daytime temperatures. The spring and autumn months are best suited for round trips and desert tours. During this time it is not so hot during the day and not so cool at night.